This article is a part of WIOMSAs video series “Voices of MARG Grantees”.

Marine Research Grant I (MARG I) is a capacity building programme of WIOMSA that targets young and upcoming scientists with the aim of providing them with opportunities to undertake independent studies. Some of this research has led to publications in international peer reviewed journals and also produced innovative solutions to address issues at the local level. “Voices of MARG Grantees” is a series of videos that showcases some outstanding MARG I case studies that WIOMSA has funded over the years. We will feature 4 case studies in the video series. This time we feature Bahati Mayoma.

Microplastics are prevalent along the coast of Tanzania, study reveals

The problem of microplastics – tiny plastic fragments and fibres – polluting marine and coastal ecosystems has attracted a lot of attention around the world. Now a WIOMSA-funded study has demonstrated that the pollutants are present in sediments and marine organisms in Tanzania.

The study “Microplastics in beach sediments and cockles (Anadara antiquata) along the Tanzanian coast”, was published in the Bulletin of Environmental Contamination and Toxicology in September 2020. It was authored by Bahati Mayoma, Christina Sørensen, Yvonne Shashoua and Farhan Khan.

The study found that plastic fragments and fibres were present at all 18 study sites on the coast of Tanzania. Microplastics were most abundant at Mtoni Kijichi Creek, an industrial port in Dar es Salaam, where 2 972 particles were found per kilogram of dry sediment. This was significantly higher than the site with the second highest abundance, Mission Cross beach (589 particles), which in turn was higher than all other sites where the abundance ranged between 15 and 214 particles per kilogram. The lowest abundance of microplastics (15 particles per kilogram) was found at Ruvula, which is situated in a marine park reserve where there is little human activity.

“Although Dar es Salaam is more polluted compared to other sites in Tanzania, the pollution level is within ranges that have been reported from other parts of Africa, South Africa for example, and from other cities, such as Venice in Italy,” explains Bahati Mayoma, an academic at the University of Dar es Salaam and lead author of the study.

At 39%, plastic fragments were the most abundant type of microplastic found. Plastic fibres constituted 17% of all microplastics found, while plastic pellets constituted 33%. Plastic pellets were only found in significant numbers at the Mtoni Kijichi Creek site. Interestingly, the pellets were identical – each one was white polyethylene. These pellets are typically used in the creation of plastic products and are likely produced by plastic manufacturers in the industrial areas of Mbagala, Kurasini and Kigamboni.

The study’s finding that the abundance of microplastics found in sediments increased close to urban settlements and industrial centres, is in keeping with studies conducted in other parts of the world.

Mayoma and his co-authors sampled beach sediments at 18 sites and analysed the tissues of cockles Anadara antiquata taken from the intertidal area of eight sites. Microplastics were found in cockles from all sites and in 48% of the cockles sampled.

“Cockles are consumed all along the Tanzanian coast, and the presence of microplastics in this commercially important species has implications for human health,” says Mayoma.

The average number of microplastics per individual cockle was significantly higher at Mtoni Kijichi Creek than at other sites. Comparisons with other countries show that the number of microplastics per individual cockle sampled from the Tanzanian coast are at the lower end of the scale, and similar to bivalves sampled in Norway.

Of concern is the fact that plastics are transboundary pollutants.

“Plastics and microplastics move from one country to another depending on the direction of the wind and the currents and this means that the entire western Indian Ocean is probably polluted in a similar way to what we have found in Tanzania,” suggests Mayoma. “We need to think about a joint strategy for combatting plastic pollution. We need to have a standardized guideline or procedure that can be adopted by all countries in the region so that we can combat plastic pollution together.”

Mayoma also advocates follow-up studies to quantify the pervasiveness of microplastics across the entire ecosystem.

“My focus was on beach sediments and cockles and the study did not touch on the water column or critical habitats like corals, seagrasses and mangrove ecosystems,” he explains. “I would say there is a big need to have more studies that can give a clear picture of the situation in those critical habitats. Without doing that we will be underestimating the scope of the problem in the western Indian Ocean.”

Mayoma’s study was funded by a grant from the Western Indian Ocean Marine Science Association. The funding enabled Mayoma to take samples across the entire length of the Tanzanian coastline.

“Everyone was surprised that a small grant could support sampling across seven coastal regions, but I was determined because I realized there is no information about microplastics in Tanzania and I wanted to make the results of my study clear to a local audience, and to the global community,” he says. 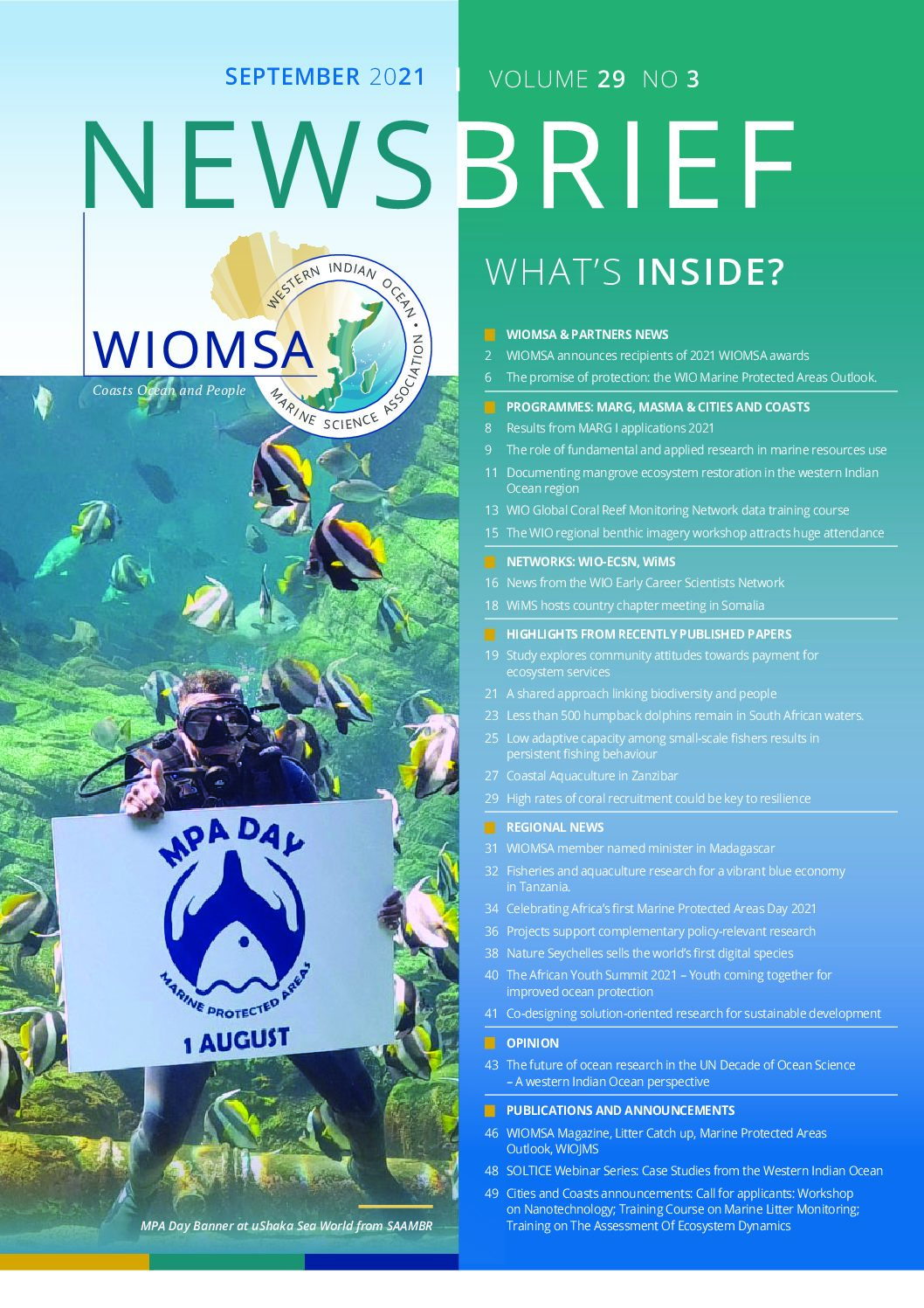